[dropcap]T[/dropcap]o accept what is, to resist the temptation to control, to manipulate or get overly attached to an outcome, opens up the opportunity for the unexpected. By accepting what is, the different becomes delightful, the surprising, deeply satisfying and life unfolds beautifully.

"You're going into Kliptown?" said Martha (not her real name), looking at me rather aghast, "Oh, you must be careful, hey. No bags in the car, hide your cell phone. It's dangerous there."

I was not sure whether she was joking with us. This was not the reaction I expected from her, of all people. Martha was born in Soweto and lived there much of her life. I could have expected a response like hers from my mother, a white, anglo saxon, women in her late 70's. She has never been into Soweto, never mind know which areas are more 'dangerous' than others, (they are all dangerous to her). From Martha, not so much.

I laughed her off, "Soweto's not dangerous. Sandton's more dangerous, in my opinion. We'll be fine."

We've been into Soweto often enough, I had no qualms about the place. Like any other part of Johannesburg, you have to be careful, aware, and not do anything stupid like drive with open windows and a phone to your ear. Unless you are a taxi driver or one of the "players" that we see driving around in their super expensive Mercs and BM's. No, going to Soweto is not the concern, not knowing what to expect when we get there is more anxiety provoking. Where will we be doing the work? Who will pitch up? We were warned that there was no electricity due to cable theft, but what else awaited us?

The power of acceptance 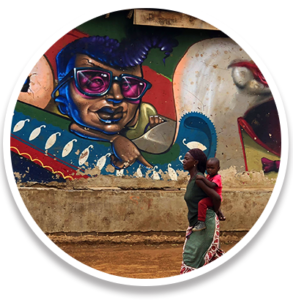 What awaited us was a windy drive into the informal settlement of Kliptown, a tiny, hot and sticky room, loud noises and music from the outside and curious onlookers coming and going. Then there was the language barrier. English was certainly not a first language for any of the participants, probably not the second or even the third language. We had to conduct a Shape of Emotion group class in this environment. A class that introduces participants to the first taste of mindfulness. A class where we are supposed to go quiet and go inward. On the surface it looked pretty impossible. The circumstances were challenging and the environment unpredictable.

Despite all of this a group class was conducted. At the end of it, the feedback was incredibly positive - one participant said that the class was "so quiet". When we recounted our story someone said that for those young people, the noise was probably not noticed as they live in it. That may be the case, and in accepting what is and trusting the process, work was done. And it was done well. In accepting what is, not trying to control, change, or let the space upset the intention, something beautiful was allowed to unfold. In a dusty, hot informal settlement on the edge of Soweto, a group of young people struggling to stay positive or find something happy in their lives, discovered a way to feel the world differently.

This week's quote is about accepting what is. It asks us to stop resisting and fighting what is happening. It's about not wishing things would be different or another way. When we let go of what we cannot control or manipulate, life opens up for us. We reduce our suffering and the pain from being too attached to a particular outcome. When we do this we allow ourselves to experience the wisdom beauty and joy of what life is offering us here and now, whatever that may be.